Warning: Bocadillo is now UNMAINTAINED. Users are recommended to migrate to a supported alternative, such as Starlette or FastAPI. Please see #344 for more information.

We're very excited to anounce that Bocadillo v0.14 is out! This release standardises how applications are structured and run, and brings new features that make working with Bocadillo even more productive.

If you have any questions or feedback about this release, feel free to get in touch!

Bocadillo 0.14.0 is incompatible with 0.13.x and earlier. We took the decision to introduce breaking changes to improve the API and the overall development workflow. You'll find tips on migrating from 0.13.x in this blog post.

Since the very first releases, Bocadillo was designed to support both synchronous and asynchronous syntax in a lot of places. This design principle was known as async-first.

However, this introduced complexity in the framework internals, and it was not clear where async was mandatory and where it was not. We realised that async-first was not the right approach.

For this reason, Bocadillo v0.14 and onwards will be all-async.

For example, you can't write this in Bocadillo v0.14+ anymore:

Instead, you must use async def:

To help with the transition:

We hope this decision will foster your interest in learning about async Python, and make working with Bocadillo more straight-forward!

Before 0.14, configuration was primarily performed via arguments to App, e.g. App(enable_hsts=True).

This proved to be hardly scalable, because:

To help with this, Bocadillo 0.14 completely changes the way applications are configured using a new configuration workflow supported by a lightweight plugin system.

This new way of doing things induces some necessary boilerplate, so to help you out we recommend you use the new Bocadillo CLI.

App configuration is now performed once and for all with the bocadillo.configure() helper. It accepts various settings which are then made accessible anywhere using the bocadillo.settings object.

As for where and how those settings should be defined, the TL;DR is: use a settings module.

To learn more, please refer to the new Configuration guide.

Plugins are small pieces of functionality which are setup at configuration time.

Many features in Bocadillo are now implemented as plugins. As a result, App does not take any parameter anymore. Instead, you should define plugin-specific settings in the settings module. These are specified in the plugins API reference.

What does this mean in practice? Well, instead of:

If this looks like writing more code, it's because it is — except you're now doing things right.

To help with this necessary boilerplate, be sure to check out Bocadillo CLI and its project creation command.

Previously, the idiomatic way to serve apps was to add

at the end of the app.py script and to run $ python app.py.

We concluded that this early design decision was bad, because:

For this reason, app.run() has been removed entirely. This has two consequences:

Here's a comparison of the minimum working application with hot reload enabled:

Previously, sending a JSON response was performed using res.media. We reckon that this was not very intuitive. Since media has been removed, we decided to replace res.media by the more straight-forward res.json:

Previously, redirecting an HTTP request to another URL was performed using the app.redirect() helper method. The fact that this method interrupted the execution of a view without a return or a raise felt like unnecessary magic. With the removal of named routes, we decided to fix this.

Redirections are now performed by raising a Redirect exception (which is exactly what app.redirect() did internally). Redirecting to another route by name is not supported anymore: you need to pass the full URL.

In particular, bocadillo create <PROJECT_NAME> instantly generates a project with all the files you need to just start writing code, instead of figuring out how files should be structured! 🚀

Digging it? Give Bocadillo CLI a star! 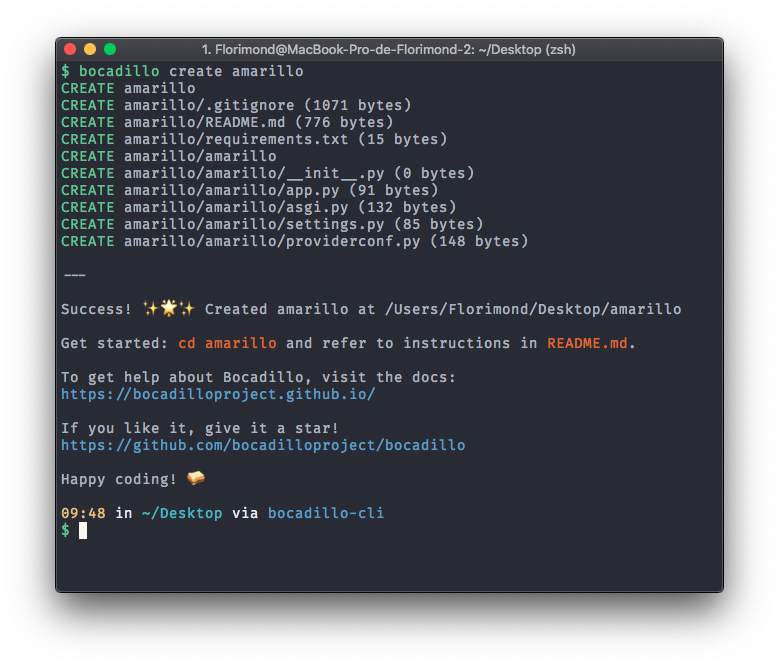 This one is pretty exciting. There's been a gap in the framework as to how JSON data should be validated, and with what tools.

In 0.14, you can now use the TypeSystem library to validate and serialize JSON data. 🎉

As a result, you can't use format specifiers anymore. So instead of {pk:d} in the URL pattern, use:

For advanced validation use cases, you can annotate the route parameter with a TypeSystem field.

Besides being available on req.query_params, query parameters can now be injected into the view by declaring them as a parameter with a default.

As a result, the following code:

Can be refactored to:

For example, you can now re-raise an HTTPError in a custom error handler:

The media framework allowed to configure the media type of an application globally and to abstract the exact serialization via media handlers. This feature brought inner complexity and quirks, and was very rarely used for anything else than JSON, the de-facto standard for Web APIs nowadays.

As a result, res.media, the media_type parameter to App as well as @app.media_handler and app.add_media_handler() were removed.

To send JSON data in the response, use res.json instead.

Previously, all HTTP routes were given a name which could be used to reverse URLs via the app.url_for() helper.

Due to the complexity introduced compared to how useful this shortcut turns out to be, named routes and URL reversion have been removed. This means that:

If you want the full URL to a view, you'll simply need to build it yourself.

Accessing the test client via app.client was deprecated in 0.13. It is now definitively removed. You must use bocadillo.create_client() instead, as described in Testing.